While catfish stockings were done in some upper elevation waters through the summer, the normal catfish stocking season is set to resume this week in the Core waters. Expansion waters in the upper elevations and Yuma area will get a final stocking during Sept. 24-29 and will include Patterson Ponds, Fain Lake, Yavapai Lakes, Stone Dam, Tempe Town Lake, Fortuna Lake, Redondo Lake, West Wetlands Pond, Pacific Avenue Pond, and Council Avenue Pond. The rest of the Phoenix area Expansion Waters will get stocked during the week of October 8-13. 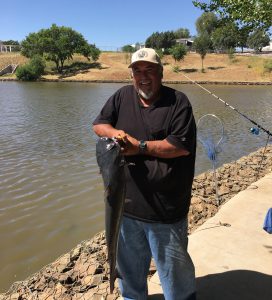 New waters were added to the CFP recently and include:

Mansel Carter will be the first new “Core” water in four years while the remaining additions will become part of the Expansion Waters. Fain Lake has been routinely stocked with trout from Page Springs Hatchery for years, and that will continue. The CFP now has 45 waters in 21 communities!

October marks the beginning of trout stocking season for waters in higher elevations that include Green Valley (Payson), Fain Lake and Yavapai Lakes in Prescott Valley, Show Low Creek (Meadows), and Patterson Ponds in St. Johns. Trout stocking in the CFP core waters will begin during the week of Nov. 15.

The city of Tempe is finishing some major improvements at Kiwanis park and lake. Remodel work included updating the fishing ramadas and installing an aeration system in the lake. Other park improvements included updating the playground and adding a splash pad. Updates on the project can be found at www.tempe.gov/parks. The lake will NOT be ready for the first catfish stocking this week, but it is anticipated to be ready by the second stocking during the week of Oct. 1-6.