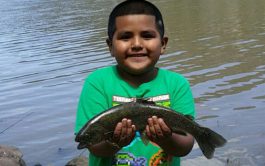 Fishing is excellent at Kaibab Lake and Dogtown Lake right now.  Folks are catching big trout on Lower Lake Mary early in the morning and late in the evening.

It is Pine Pollen season in the Flagstaff and Williams area so you may notice the yellow pine pollen floating on the lakes!

We stocked a load of bonus trout from Colorado into Dogtown Monday morning.  The fish averaged about ¾ of a pound.  Folks were catching them right after we stocked on spinners, spoons and PowerBait.  Folks are doing great on Green garlic PowerBait and rainbow PowerBait today.

Kaibab received a bonus stocking of channel catfish on Tuesday and should get another load Friday.  Folks are catching everything (trout, bluegill crappie and catfish) on worms fished under a bobber.  All of the fish were being caught close to shore.  Hot dogs on the bottom were also working for catfish.

There was a report posted on a fishing blog of an angler catching some trout on Cataract.  Looking at the pictures posted it looks like some of the smaller fish that were stocked last fall to make room at the hatcheries have survived and grown big enough for folks to catch.  It appeared the fish were caught on a spinner. No new reports.

Stocked with channel catfish Tuesday and should get another load on Friday.  I would try worms under a bobber.

Ashurst was stocked with 9,000 bonus trout last Wednesday.  Folks were catching fish over the weekend.   Stocked this week.  Should be getting another load of bonus trout tomorrow (Jan. 9).

Frances Short Pond was stocked with catfish Tuesday and should be stocked with catfish again tomorrow.  I caught eight catfish yesterday morning and kept four nice ones on hot dogs on the bottom.  Folks using worms were also catching catfish worms under a bobber.  Folks fly fishing  were catching bluegill, crappie and trout in the morning while I was there.

Folks fishing from boats or wading past the weeds are still catching  are still catching some really big trout early in the morning and in the evenings.  Fishing with worms under a bobber has been a good method to catch trout up to 21 inches with all of the fish being really fat.  Folks are also catching fish on Flies and lures.

Kinnikinick Lake – I had a report from one of our Wildlife Managers that folks were catching rainbow trout and brown trout over the weekend.

Blueridge Reservoir (CC Cragin) will not be stocked this year.

Knoll Lake – has been stocked.